Florida law defines criminal trespassing as entering or remaining in or on a property without authorization. Trespass charges are misdemeanors and are very common. Fortunately, they are one of the easiest types of cases to get dismissed.

Many think trespassing is as simple as entering despite a “Do Not Enter” sign. However, trespassing entails scenarios beyond just that. For example, let’s say you legally enter a bar, but the owner later asks you to leave. If you refuse to leave, you are trespassing and can be arrested.

In Florida, the penalties for trespassing are not that severe, but you don’t want to have to deal with them. A trespass charge on your record does not look good on a background search.

What Is Considered Trespassing in Florida?

In Florida, trespassing is a criminal violation and a misdemeanor offense. Florida Statute 810.08 defines trespassing as entering or remaining in a structure or conveyance without authorization, invitation, or a license. In addition, staying on the property without the expressed or implied permission of the owner is also trespassing. 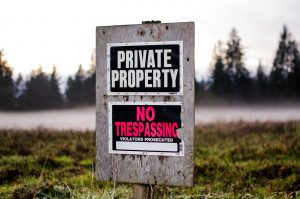 What Are the Penalties for Trespassing in Florida?

Penalties for trespassing in Florida vary depending on the circumstances regarding the incident. Generally speaking, trespassing offenses alone are charges as second-degree misdemeanors. That is, if you trespassed with no other criminal intent, like theft, while entering property without permission.

Let’s say a group of teenagers sneak onto a lot at night to drink alcohol. Since the owner didn’t invite them, they could be arrested and charged with criminal trespassing as a second-degree misdemeanor.

If you commit trespass with a firearm or other dangerous weapon, or if you arm yourself while inside the structure, you could face a third-degree felony charge.

If the prosecution can prove that you committed other crimes or had the intent to commit other crimes while trespassing, your charges could be upgraded to more serious crimes like:

What Do Prosecutors Need to Prove to Establish Guilt?

Trespass cases can involve other complicated legal issues or elements. However, to prove that you committed a crime, the prosecution must establish beyond a reasonable doubt:

Since trespassing is a general intent crime, the only evidence prosecutors only need to prove guilt is that you were on or inside the property without authorization. They need to prove intent to trespass but don’t necessarily need evidence of any intent beyond trespass to convict you.

The prosecution can use physical evidence like surveillance footage or witness testimony to support their case against you.

Under Florida law, if a property owner catches a trespasser, they are legally allowed to seize the trespasser until police arrive. Typically, this alone is evidence of trespass.

Is Trespassing a Violent Crime in Florida?

Trespassing is not considered a violent crime. If a person guilty of trespass also committed violence, the prosecution usually renounces trespass charges for more serious ones. Those are typically criminal charges like assault, battery, burglary, or robbery. However, you can get charged with trespass in addition to other charges.

What Is a Trespass Warning in Florida?

Any signage clearly defining private property lines and the penalties for crossing those lines is a trespass warning. However, if there is no clear signage for unenclosed land or personal property, it may not be subject to criminal trespass.

How Can a Florida Trespass Attorney Defend Me?

A trespass attorney can help you devise a strategic defense plan. For example, we could prove that you did not intend to trespass. Almost all trespassing charges involve drugs or alcohol, so it is easy to blame someone’s actions on it.

It’s also possible to argue that no clear communication from any authorized individual told you to leave the premises after you were invited or permitted to enter. We see that a lot when there is only a verbal trespass warning and no paperwork to support it.

Sometimes we see cases where the person making allegations of trespass does not have the right to deny you permission onto the property. Or, if there was no visible or correctly posted warning of trespass, we could argue that you did not know you were trespassing and therefore had no intent to commit a crime.

Our firm has defended clients facing trespassing charges in Florida for over 60 years. We have had countless trespass charges dismissed or the penalties minimized. We have qualified and skilled lawyers who can help you determine the right defense strategies to deploy for your case.

Our goal in every case is to protect your record and have you avoid jail.